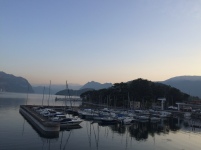 This post was commissioned by Bentley Magazine and can be seen in the Summer 2015 edition.

A spring dawn over Lake Iseo in northern Italy and the bells in the church of St Peter and St Paul call the time. One counts out the hour; the other chimes for half-past. Only the hardiest souls brave the water into which the hills are surrendering the last trickles of winter. What swimmers there are, paddle and squawk before diving among the reeds in long, shallow glides. As the ducks reappear, ripples break the reflection of an Italian flag hanging over a marina, completely at rest. To the east the sky has the same pink hue that is found in the sardines served in local restaurants, once they have been caught in the lake and dried for six months. Lake Iseo is at rest; as untroubled by the shade from its superstar cousin to the west – Lake Como – as it is by the shade from the mountains of the pre-Alps to the north, still dusted with snow.

Next summer though, Lake Iseo will shine. For a mere 16 days it will host the latest work from the Bulgarian-American artist Christo. The lake will be the stage for a series of golden walkways connecting Sulzano on the mainland to the islands of Monte Isola and San Paolo. Shimmering fabric will hover just above the water on specially designed inter-connected cubes. The lake currently has no bridge, so the project will allow, for the first time, passage across to the islands on foot. When asked why he chose Lake Iseo, Christo answered, “because it is human.”

The Floating Piers will be Christo’s first major work in ten years, and the first since the death of his beloved wife, Jeanne-Claude. Nearly two miles will move on the water; another mile will flow seamlessly through the tight pedestrian streets in Sulzano and Peschiera Maraglio. Christo says the “invitational” feel of the work is important; it seeks to be touched. He uses fabric to translate a fragile, nomadic quality, “so you can see the wind, not just feel it”. The contrast of the gentle fluidity on the water and the sturdy presence of the land will be sexy, he says with a smile.

The project is expected to cost $10 million, all of which Christo will pay for through selling sketches of the plans, scale models and past works. He does not balk at the cost: “These projects are our children,” he says, “do you have a budget for your children?” He refuses commissions and sponsorship so as to remain in complete control. But as the installation will include 70,000 square metres of fabric, 200,000 polyethylene cubes, an army of workers (and they are workers, never volunteers, and they are all paid) and 200 anchors, some of which will weigh 7 tons and be 90 metres deep, it is a colossal undertaking. Just as well then that the head of the construction firm is qualified in both engineering and philosophy.

Lake Iseo, between Milan and Venice, will be a wonderful setting for The Floating Piers. Home to luxury yacht maker Riva and dominated by Monte Isola (the tallest lake island in Europe) it is accustomed to dramatic beauty. The smaller island of San Paolo, which will be encircled by the 16 metre-wide piers, is owned by the Beretta family. Christo relates how, when he was seeking permission from the local mayors for the project, there was a reception on the island. Passing each person a small case, Franco Beretta whispered conspiratorially, “it’s not a gun”. Binoculars; to everyone’s amusement, better to view the proposed area. The mayor of Monte Isola clapped Christo on the back. “Approvato!”

Christo and Jeanne-Claude were born on the same day in 1935, he in Bulgaria, she in Casablanca. As an art student in Sofia, Christo was expected to spend time with the farmers along the route of the Orient Express, arranging the countryside to showcase the triumph of communist agricultural policies. He learned to marshal the environment for spectacular effect. Having completed his education in Vienna he moved to Paris, selling portraits to pay the rent. (He painted Brigitte Bardot in 1958 at the behest of his landlord, the soon-to-be famous hairdresser Jacques Dessange, making two extra pictures for himself.) A woman named Précilda de Guillebon once asked him to paint her portrait. He did so, glad for the work. And he also fell in love with the woman’s daughter, Jeanne-Claude. It was to be the start of a formidable and very successful artistic partnership. They moved to New York in 1964. Christo still lives and works in the SoHo block they first moved into.

Best known for wrapping buildings, in reality Christo has done this only three times. But it is the scale of these works and otherworldly nature that has generated his reputation. The centerpiece of this genre was his wrapping, in 1995, of the German parliament building, the Reichstag, in silver fabric for 14 days. The Chancellor at the time, Helmut Kohl, was horrified at the concept and had the decision put to a vote. He lost. It made the project “a hundred times more important”, Christo believes. But it was not the first controversy his wrapping had caused.

In 1963 he displayed a wrapped wheelbarrow in a Venetian gallery, attracting the attention of Cardinal Albino Luciani. (He would later become Pope John Paul I, supposedly-murdered in 1978 and remembered as the ‘30-day Pope’.) Cardinal Luciani interpreted the piece as depicting a woman; the wheelbarrow’s handles being the legs. He was livid, seeing the work as blasphemous and insisted the gallery be shut.

Christo delights in telling the story over and over. He marvels at art’s ability to provoke such emotion and at how one person’s perception can differ so markedly from another’s. An echo of the Cardinal Luciani episode occurred in the press conference for The Floating Piers in Rome. A journalist from Radio Vatican asked if the symbology of ‘walking on water’ had been a deliberate religious reference. “Well, my name is Christo,” the artist explained, to much laughter. He insisted all interpretations are equally valid, and his intention was only to create a beautiful, sexy, temporary work of art.

The temporary nature of his large projects adds an additional aesthetic quality, he says. Like our childhood, or our life itself, he instills in his work what he calls the “presence of the missing.” He will turn 80 in June and having lost Jeanne-Claude in 2009 is very aware of the fragility of life. But he shows no signs of slowing down. He moves with a languid style, punctuated with explosive animations when discussing art. Talking with Christo over dinner about his work feels like being assaulted with ideas and imagery. His frizzy white halo of hair bobs up and down as he jabs the tablecloth with his elegant fingers to illustrate a point. His friends try to calm his excitement and get him to eat, with little success. But when viewing the footage of a secret trial for The Floating Piers, which took place in February on the Black Sea, he sits back, and his face adopts the spellbound wonder of a child seeing a magic trick for the first time.

The Floating Piers will continue Christo’s ideas of connection and the romance that can be found all around us; a lot of hands will be held on the golden walkways. He has the rare ability to make obvious natural beauty that may otherwise be overlooked. Approaching Rome airport it is apparent there is no ‘set-down area’ or ‘passenger drop-off’. A sign indicates ‘Kiss and go – 15 minutes’. The driver smiles and shrugs. “Time for a long kiss,” he says.