This post was published in 1843 Magazine and can be seen in the June/July 2017 edition.

The Crematorium Hofheide is situated in the middle of a lake in Holsbeek, Belgium. An elongated core of earth-coloured stone wrapped in a layer of rusty steel, it appears to float on the water – although on sunny days, when the sky is reflected by the surface of the lake, it seems to float in the air. In fact the structure sits on top of a partly buried plinth, connecting the world above with the world below. In 2016, it won the Architizer A+ award in the Religious Buildings and Memorials category. This year RCRArquitectes, the Catalan trio who designed it, won the Pritzker prize for a body of work, architecture’s most prestigious gong.

The crematorium at Holsbeek is part of a wave of new design work aimed at reconceiving death. As rates of religious belief continue to decline across the rich world, and fewer people feel that the ceremonies and aesthetics of traditional religious funerals suit them, designers are catering to people who want more choice. Much of this work has focused on death as a part of nature. When Designboom, a magazine, ran a competition called Design for Death in 2013, first prize went to Enzo Pascual and Pierre Rivière for “Emergence”, a biodegradable capsule in which ashes are buried. As it dissolves, the casing enriches the soil around it, helping plants to grow. According to Amy Cunningham, who runs Fitting Tribute Funeral Services in New York, some of her clients prefer to “surrender fully to Mother Nature, rather than working against her”, and choose to be buried in coffins made of wool, banana leaf or woven willow. The latter, she says, appeal particularly to women. “They say, ‘Oh my God, that’s me!’ as if they’re looking at a dress in Saks on Fifth Avenue.”

But while many of these products remain a niche concern, the design of crematoriums is anything but. In 1960 just 3% of America’s dead were cremated; this year cremation will overtake burial in the United States, matching countries like Britain, Sweden and Denmark, where around three-quarters opt for their bodies to be dispatched by fire. Yet the rising popularity of cremation is not matched by that of crematoriums, where grim efficiency tends to trump ceremony: characterless corridors, rows of uncomfortable seats and bad lighting combine with a shortage of space to ensure that seeing off loved ones is depressing rather than uplifting. “You feel like you’re on a conveyor belt,” says Louise Winter, whose company Poetic Endings provides bespoke funeral services in London. She is seeing a rise in the number of people requesting “direct cremation”, where a body is burnt without any ceremony at all, so that families can bypass what Winter describes as “ugly places on the edge of town with bad parking”.

Darkness to light
MAIN IMAGE Light shining through the façade of the crema­torium at Holsbeek produces changing patterns on the wall. ABOVE A ceremonial room at Crematorium Hofheide.

The move towards better crematoriums is particularly pronounced in Europe – one of the most secular parts of the world. “Crematoriums tend to be too industrial,” says RCR’s Carme Pigem. “But death is a part of life. Once we leave the Earth we are still part of the universe, and architecture can help connect the two.” At Holsbeek they created a gently symbolic play of light and shadow. The thin steel strips encasing the building hang vertically, allowing light to shine onto the walls in a pattern which changes throughout the day and reflects the ripples on the water outside. Inside the sepulchral spaces where ceremonies take place, light pours through wells reaching into the centre of the room from the ceiling, creating a sense of intimacy and privacy. The crematorium is at the heart of a park with an orchard and two cemeteries full of wild flowers.

The crematorium in Rennes designed by Plan 01, a French firm, is constructed as a sequence of circles – a shape which, as well as having resonances with ancient sites like Stonehenge, gives the interior of the building a feeling of openness and air. The exterior, clad in pale wood, is soft and tactile. Inside there are no corridors but a series of interlocking, curved spaces with floor-to-ceiling windows. Both here and at the Woodland Cemetery in Stockholm, by Johan Celsing, the architects have used perforations in the walls to absorb sound and soften the acoustics. They have paid attention, as Celsing puts it, to the “clemency” of the building.

The cremation itself is not the only part of the process that is being reimagined. After her husband died, Diana McGlue kept his ashes on a bookshelf at home for three years. He wasn’t religious and “faceless crematoria” held no appeal. Then she discovered Sacred Stones, a British company founded by Toby Angel. Last year it opened Willow Row in Cambridgeshire, the first round barrow to be built in Britain for 5,500 years; another will open soon in Shropshire, and McGlue will keep her husband’s remains there. 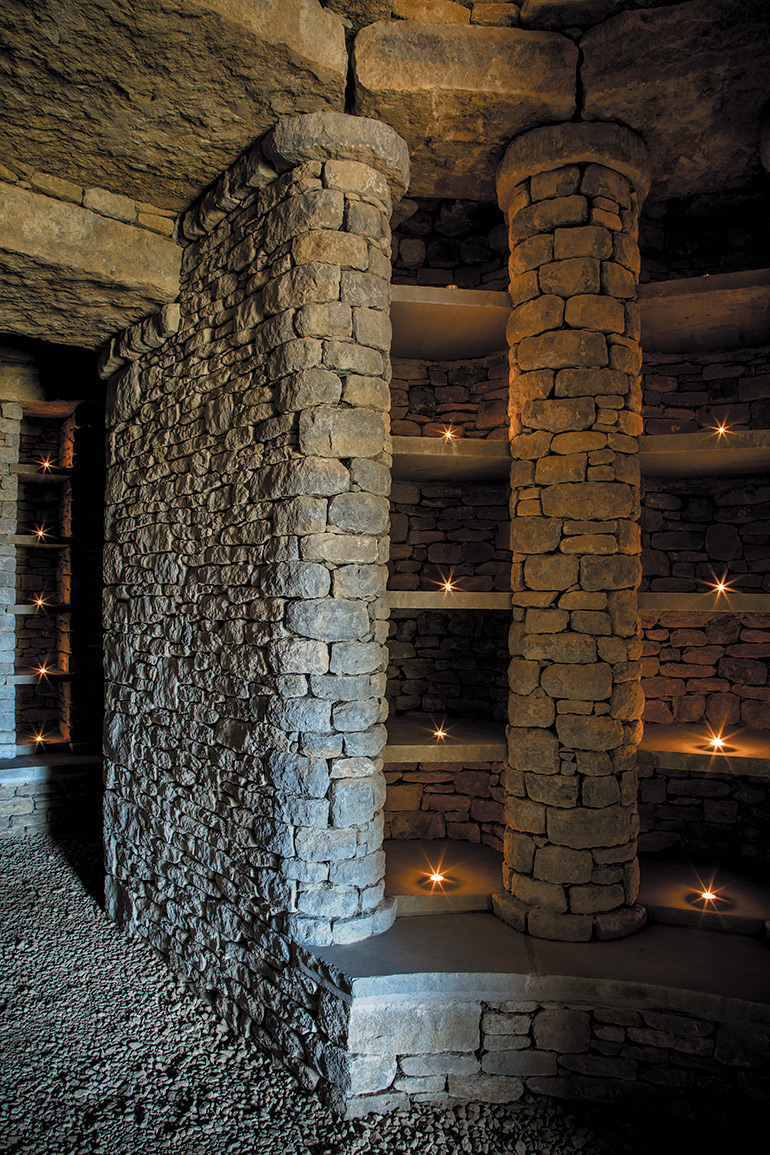 In with the old
ABOVE The niches at Willow Row in Cambridgeshire. BELOW The entrance to the barrow 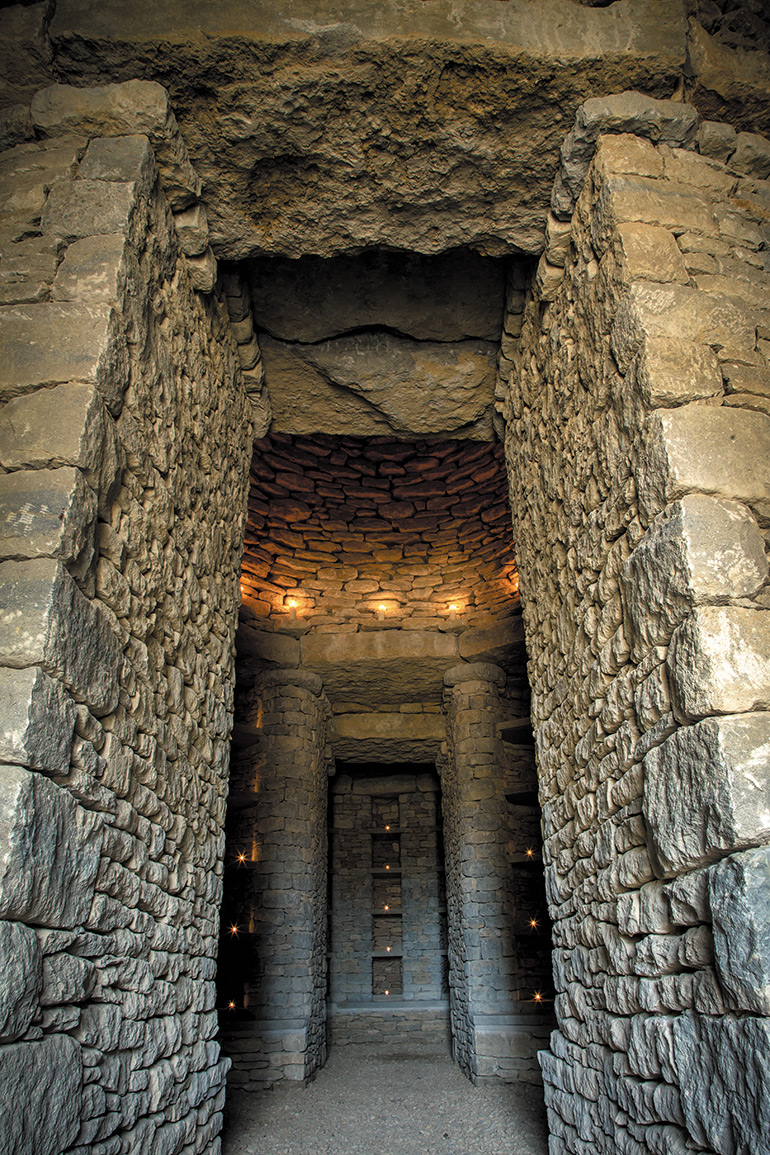 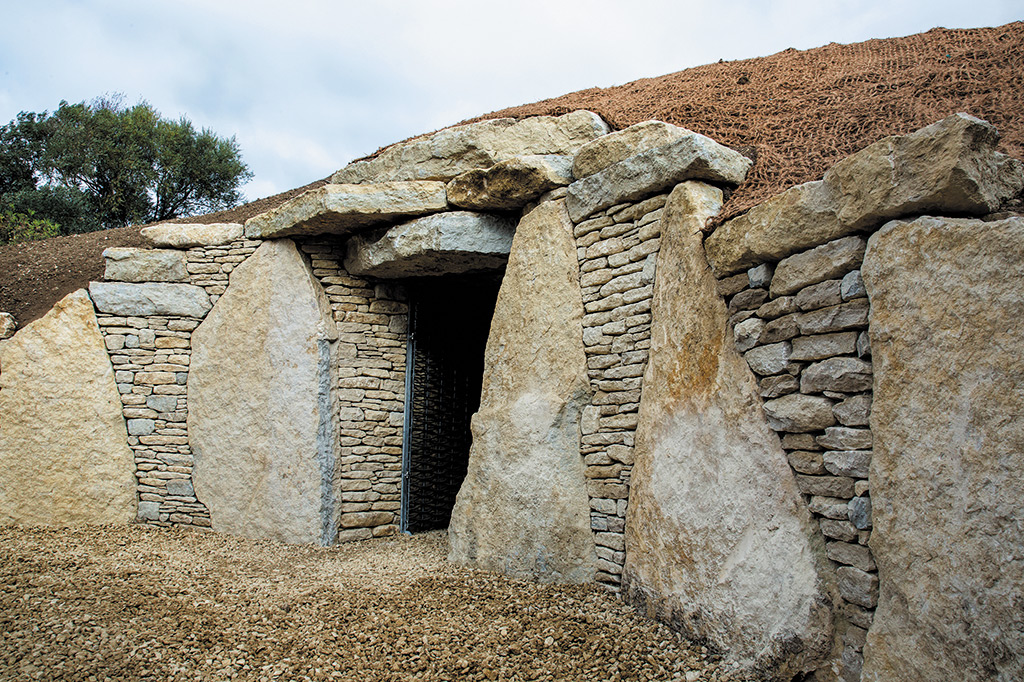 Angel did not enjoy seeing his aunt off in a crematorium. “Nasty blue carpet, Luther Vandross and 20 minutes later we were out.” He wanted to create a space which, while open to people of all faiths and none, has an atmosphere of sacredness. A six-foot, diamond-shaped sentinel stone welcomes visitors; behind it is the softly domed barrow. Sound is reduced to a low, comforting hum. The 11-metre wide structure, with a stone roof five metres high, consists of an inner chamber of 59 large “family” niches which can take up to five sets of ashes, at a cost of £7,000 ($8,700) for a 99-year lease. This is surrounded by an outer circle of 349 individual ones, available for around £2,000. Families can gather at the barrow for ceremonies lasting as long as they want. York-stone benches lining the outer circle and inner chamber offer a place for contemplation and remembrance.

Prehistoric barrows harnessed the energy of a communal gathering. Places like Willow Row and the crematoriums at Holsbeek and Rennes show how these ideas can be updated. “Architecture can describe the relationship between spirit, sensuality and emotion,” says Pigem. “Through that, we can celebrate life.”