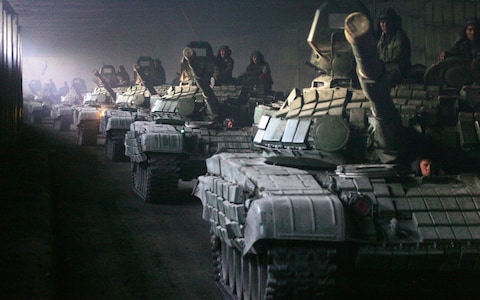 A column of Russian tanks moves towards the Roki tunnel in South Ossetia, Georgia, after the brief war there in 2008CREDIT:DMITRY KOSTYUKOV/AFP

This article first appeared in the Telegraph on July 11th. See more of my articles for the paper here.

There is much anticipation about the messages Donald Trump will send at the Nato summit taking place in Brussels.

But another actor making far fewer headlines embodies all the main challenges facing the security alliance in 2018.

Georgiais a small country, but represents the big issues of the day. Thorny questions over defence spending, operational commitments and a resurgent Russiawary of Nato’s eastward expansion are all played out in the nation of little over four million people.

Sat at the strategically important crossroads where Europe meets Asia, how the alliance handles the country’s hopes for Nato membership will say much about the current level of confidence in the alliance. It will also send a powerful message to Vladimir Putin.

Georgia spends more than the politically-charged figure of two per cent of its GDP on defence and is the second largest troop-contributing nation in Afghanistan today (it has had 33 soldiers killed in the country). It works with Nato naval forces in the Black Sea, is very pro-Western and seeks to join the EU. On paper it is doing everything asked of an aspirant new joiner to the security organisation.

But it has one big thing counting against it: geography.

“It is just in the wrong part of the world,” says Nicholas Redman of the International Institute of Strategic Studies, a think tank. Bordered by Russia to the north and Russia-leaning Armenia and Azerbaijan to the south, it would be the furthest east Nato has ever pushed. Russia would not take kindly to such a move.

Russia and Georgia fought a five-day war in 2008, after which two regions of Georgia – Abkhazia and South Ossetia – were annexed. Russian troops are still stationed in the country and show no sign of leaving. Even if relations between Tbilisi and Moscow are today tense but workable, the same could not be guaranteed were Georgia to join Nato.

Discussions about membershipstarted in the early 1990s, but only lukewarm support was offered to Georgia in response to the 2008 Russian military victory. Membership was spoken of ‘when not if’, but no firm plans ever materialised. Georgians have never forgotten this pledge, even if some in the alliance would rather they did. This presents two huge problems for Nato.

First, was Georgia to join Nato, what border would be recognised, asks Mr Redman: the sovereign border of 1992, or the de facto new line drawn by Russia in 2008?  The war has largely been forgotten and “there is a resignation by Western states that the two annexed regions are almost impossible to recover”. Many in the country disagree.

Nato’s fundamental principle – that an attack on one is an attack on all – would sit awkwardly in such a situation. Would existing members be happy to admit a new ally with such caveats?

The second problem for Nato is that the push eastwards over the last decade “appears to Russia to be an effort to rip countries from its orbit,” Mr Redman warns. There is no appetite in Nato right now to risk worsening the situation.

“There might be an anodyne statement like ‘we haven’t forgotten you’ but Nato has problems closer to home,”  he added, saying that the subject of Georgian membership is generally considered to be off the table.

If so, nobody has told the Georgians.

Speaking this week to the Telegraph, senior politicians from the country wereuncharacteristically united and resolute in their determination to join the alliance.

“The country has made significant reforms and Georgia is a much more progressive country than some that have met or are near to Nato membership,” said one member of the ruling party. “We would like to have a more concrete expectation of membership.”

“Putin has gone on record as saying that if he hadn’t invaded Georgia in 2008, Georgia today would be a member of Nato,” she said. “His actions were extremely deliberate in dismembering our country.”

Any mention of Georgia at the Nato summit will be interpreted as either supportive of the country’s bid for membership, or taken as a sign the alliance would rather focus on other things. Either way, and beyond the razzmatazz taking place elsewhere at the summit, echoes from the forgotten war in Europe’s eastern outpost will be heard far and wide: from Washington to Moscow, in fact.